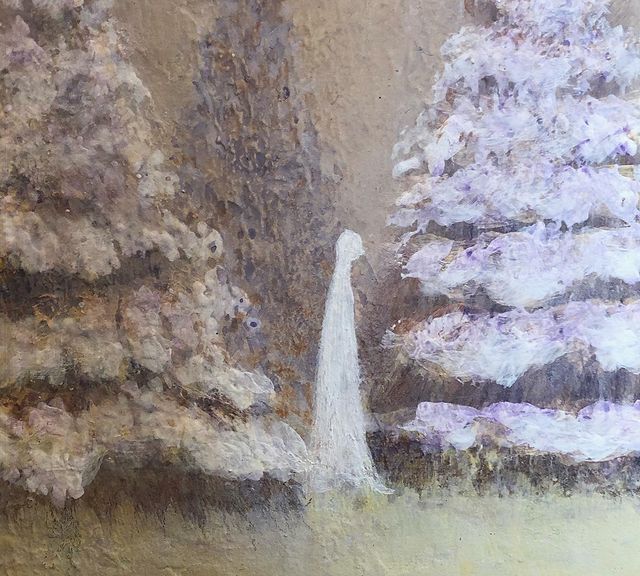 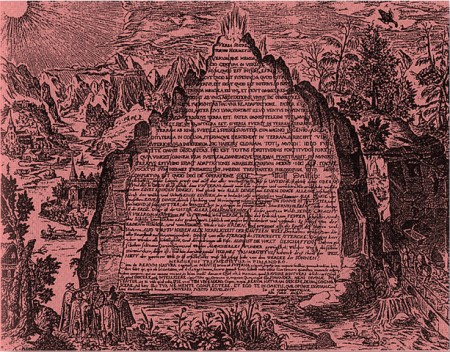 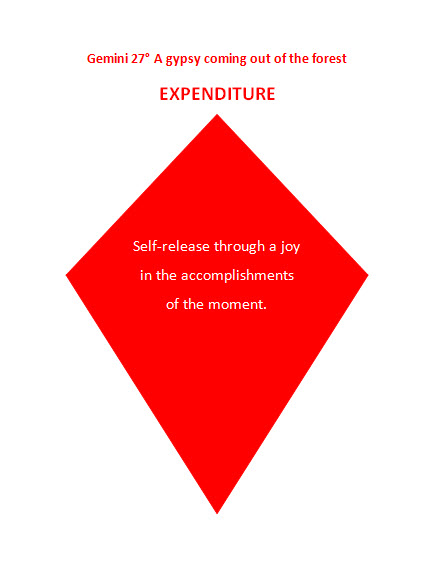 The Root Chakra awakening:  “By Invitation Only.”

Gemini 27° A gypsy coming out of the forest

This is a symbol of human enthusiasm or of self-consciousness mobilized in a freshness or naivete of self-realization and dramatized by an irresistible desire for success and recognition in an every day world. Here are the enlarged horizons which follow from the individual’s faith in his own potentialities and his willingness to draw on them prodigally and in generous co-operation with his fellows. Man thus finds the resources of all nature available for his exploitation.

The keyword is EXPENDITURE.

When positive, the degree is self-release through a joy in the accomplishments of the moment, and when negative, complete disinclination to enter into the ordinary relationships of society. 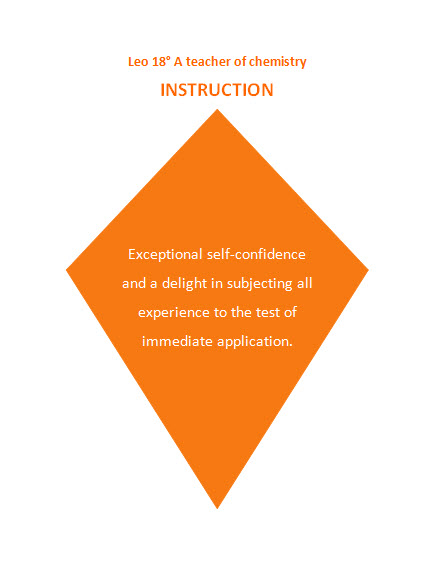 Leo 18° A teacher of chemistry

This is a symbol of the human mind’s illimitable power for penetrating into the deeper mysteries of an everyday world, and of the growing ambition of man to gain an effective control over all the processes of nature. Here is high organization of the intellectual faculties, and a special skill in the practical adaptation of scientific principles to commonplace problems. The individual is given a full sense of his creative responsibilities.

The keyword is INSTRUCTION.

When positive, the degree is exceptional self-confidence and a delight in subjecting all experience to the test of immediate application, and when negative, unintelligent dependence on supposition or rules of the book. 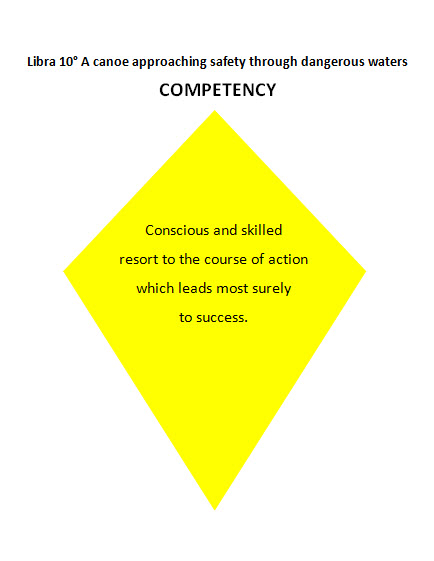 This is a symbol of the necessary validation of all experience through an acceptance of risk, and of the refinement of personal skills through a direct contact with the recurrent exigencies of everyday living. Here the genius of the race is preserved by a fresh and constant participation in life’s transient situations. There is always the goal through which man is led to develop his powers.

The keyword is COMPETENCY.

When positive, the degree is conscious and skilled resort to the course of action which leads most surely to success, and when negative, a primitive love of adventure and a wholly unintelligent faith in sheer good luck. 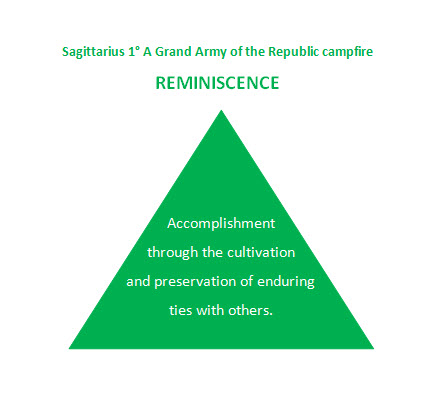 Sagittarius 1° A Grand Army of the Republic campfire

This is a symbol of man’s continuing appreciation of every phase of experience that ever has opened up for him, and his desire to live worthily as a basis for every present or future well-being. Here is an emphasis on a subjective passivity of value to the individual as it becomes the inner strength by which he may sustain himself at critical points in his affairs. In his periodic and symbolical return to center he regrasps each special potentiality of his being.

The keyword is REMINISCENCE.

When positive, the degree is accomplishment through the cultivation and preservation of enduring ties with others, and when negative, superficial idleness and unhealthy veneration for the past. 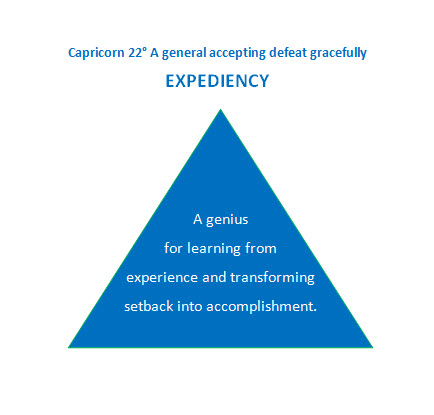 This is a symbol of the immediate opportunism by which the human will develops its real power, and of its underlying and uncompromising loyalty to the long-range ends in view. A realistic practicality is made effective through a self-disciplined grace of spirit, so that men are won over very often by the enemy they have defeated. The individual exalts his destiny as he finds its roots established in values accepted by his fellows as well as himself.

The keyword is EXPEDIENCY.

When positive, the degree is a genius for learning from experience and transforming setback into accomplishment, and when negative, irresponsible acceptance of the worst and insensibility to self-adequacy. 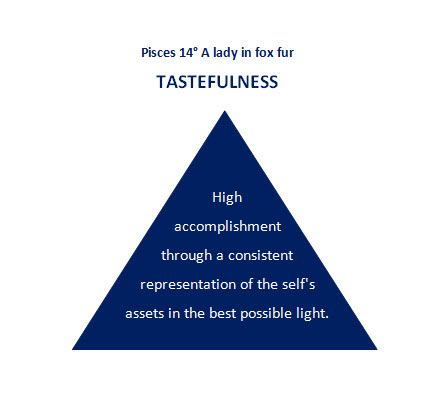 The Third Eye Chakra awakening:  “The truth is revealed within.”

This is a symbol of the ever-effective dynamic with which everyday custom endows mankind, dramatized here by an individual’s desire to be in style and to express opinions of momentary weight. Men are strengthened through whatever they are able to possess or do and think in common, but this is their bondage unless they are able also to contribute a creative content to their own experience. The self gains integrity as it learns never to surrender its initiative, and so it adds its touch to all reality.

The keyword is TASTEFULNESS.

When positive, the degree is high accomplishment through a consistent representation of the self’s assets in the best possible light, and when negative, amoral opportunism. 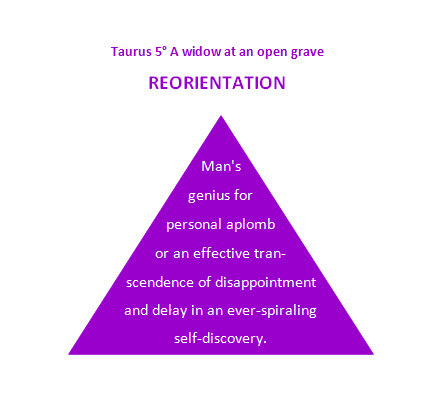 The Crown Chakra awakening:  “A messenger in the house.”

Taurus 5° A widow at an open grave

This is a symbol of the impermanence of physical things whenever man permits reality to come to center in the static representation, and thus neglects the creative contribution through which he has responsibility for the larger whole. Implicit in the reversed symbolism is the need for an inner and constant return to every enduring value achieved by the self, and for a complete and immediate release from all outworn elements of experience.

The keyword is REORIENTATION.

When positive, the degree is man’s genius for personal aplomb or an effective transcendence of disappointment and delay in an ever-spiraling self-discovery, and when negative, surrender to frustration or descent to ineptitude. 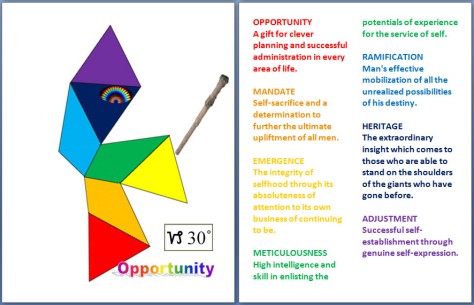 The interpretations are the official ones provided by Dr. Marc Edmund Jones, from his book, Sabian Symbols in Astrology, the 1953 First Edition, published by The Sabian Publishing Society, New York; printed in the United States of America by the Roberts Studio Press, Arden, Delaware.

To learn more about The Sabian Assembly, the organization founded by Dr. Marc Edmund Jones on October 17, 1923, where seekers are bound by “searching for competent rather than easy answers to the problems of life”, please visit The Sabian Assembly at sabian.org. 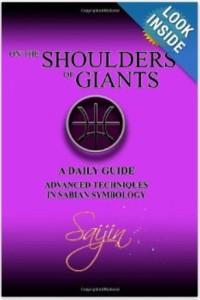 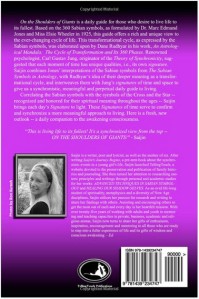